If you’ve made the decision to buy this beast for your PC, the next step is to choose the finest Ryzen 9 5950X motherboard. With a BIOS upgrade, the Ryzen 5000 may be used with any 400 or 500 series processor. That implies putting it on your old motherboard would be a fantastic option.

To get the most out of a processor as powerful as the 5950X, you’ll need the proper motherboard. We’ve compiled a list of the top 7 Ryzen 9 5950X motherboards in this post after carefully evaluating the advantages and disadvantages of each.

We’ll offer motherboards for all budgets and a wide range of PC configurations, in the hopes of putting a stop to your motherboard hunt. Let’s get right into the reviews without further ado! 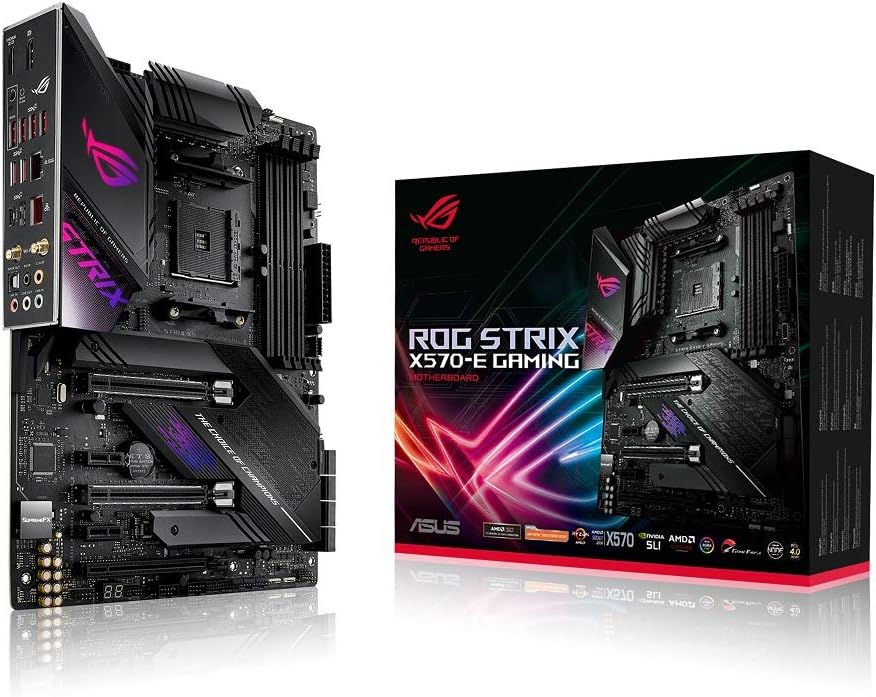 In terms of premium consumer-level features and benchmark results, the ROG Strix X570-E Gaming exceeds the competition by a substantial margin. This one was designed with the power user in mind, so you’ll lose a third M.2 slot in exchange for more USB ports and VRM performance.

The board includes a 16-phase VRM with a big chipset and MOS heat sinks, as well as a water pump header. This setup can easily handle an overclocked Ryzen 9 5950X processor. Eight USB 3.2 Gen2 ports, one USB-C, 2.5G LAN, MU-MIMO Wi-Fi 6, excellent audio, and a BIOS Flashback button are all jammed onto the back I/O panel.

Although the power consumption at full load and idle is greater than the competitors, the performance gain is definitely worth it. There are more powerful boards in our selection, but the total VRM performance and price combination of the ASUS ROG Strix X570-E Gaming is by far the greatest and the best Ryzen 9 5950X motherboard. 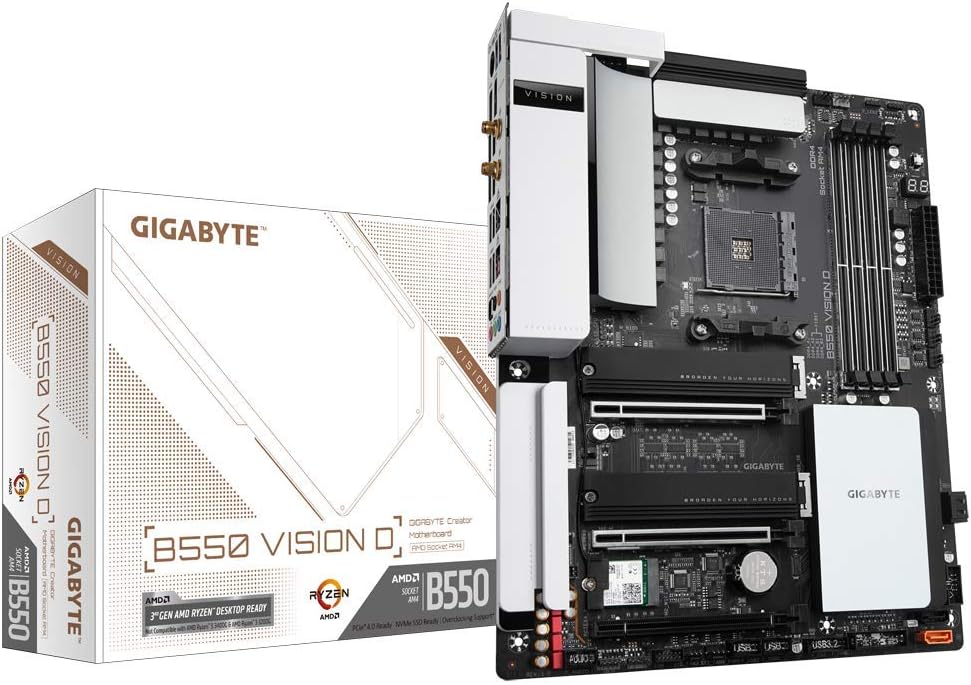 For several reasons, it is the finest Ryzen 9 5950X motherboard for video editors and businesses for the Gigabyte B550 Vision D motherboard. It has a sophisticated appearance that many artists will like, and when you throw in Thunderbolt 3 and dual LAN, you can understand why this motherboard deserves to be on our list.

On the Vision D, there are three PCIe x16 slots, two M.2 SSD connections with thermal pads, and four SATA ports, but no PCIe x1 slot. Given the presence of Thunderbolt 3, the loss of SATA connections and a PCIe x1 slot aren’t necessarily drawbacks.
Power delivery is also unaffected.

The Vision D is almost as great as the B550 mid-range mainboard with a high VRM phase 12+2, explicit integration of PCIE 4.0, and overclock RAM speeds of 5100MHz. If you don’t like white motherboards, this is the sole reason to avoid them. 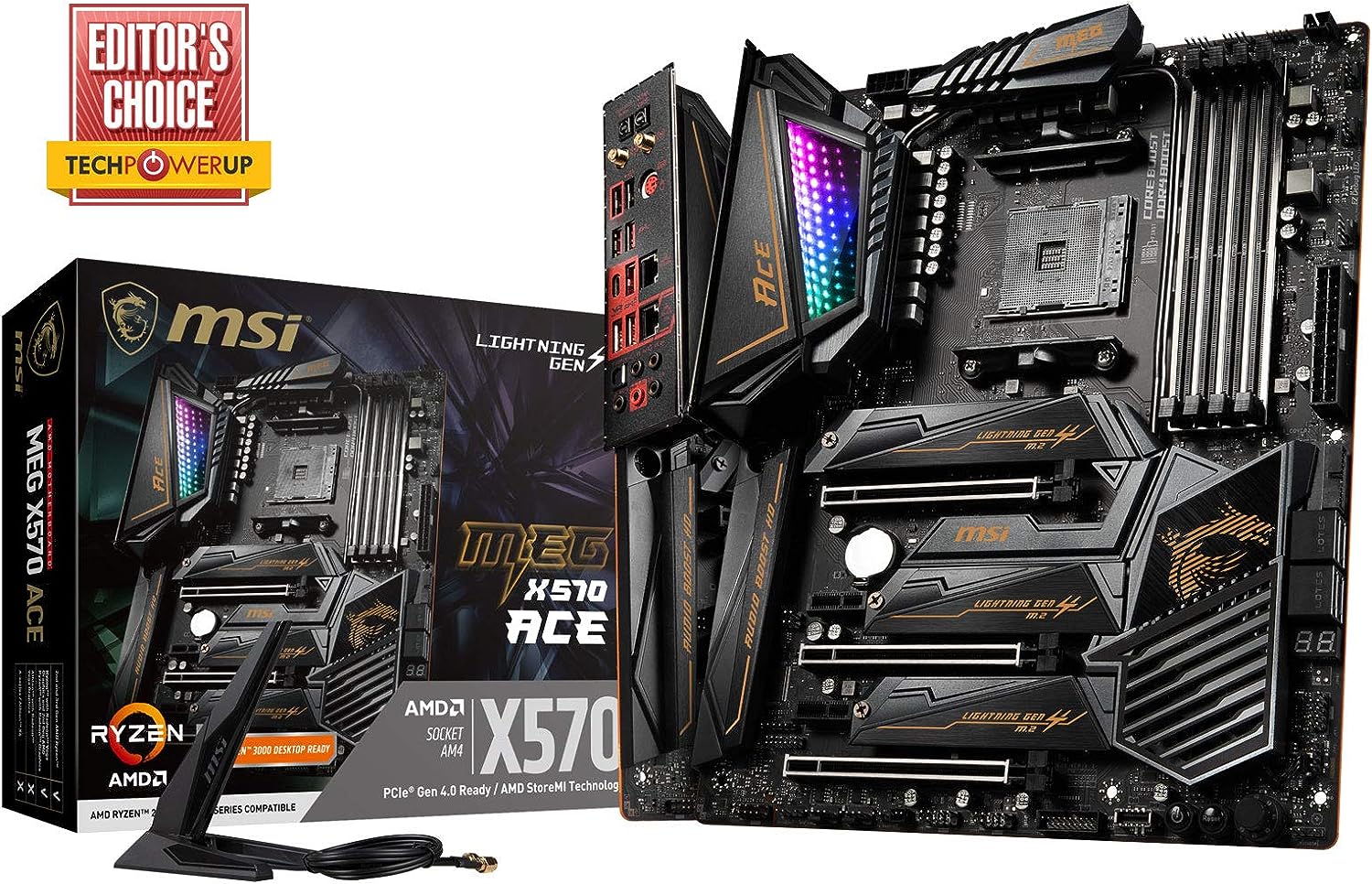 The MEG X570 ACE is a well-balanced, low-cost X570 motherboard that will appeal to both gamers and creators. The X570 is an enthusiast chipset, thus the motherboard should be able to handle everything that this flexible platform has to offer. The ACE ticks all the appropriate boxes and then more in our situation.

There’s enough room to push Ryzen 9 5950X to its maximum thanks to a mix of 12+2+1 IR Digital phases and hefty Frozr heat sinks. You’ll be tweaking and modifying your way through MSI’s feature-rich Dragon Center and the new Click BIOS 5 profiles for a long time, and MSI makes it fun.

To summarize our comparison, the Asus ROG Strix X570-E Gaming provides the best value for money while without sacrificing any important features. The Gigabyte B550 Vision D is the finest high-performance motherboard if you want to go all out for the motherboard. So, it concludes our discussion. We hope it was useful in making your selection. If so, let us know which one you’re going to use in your Ryzen 9 5950x build.

The Ryzen 9 5950X surpasses every other consumer-level motherboard on the marketplace currently, but at a price. It makes sense for multi-threaded applications like professional video editing, where it may be combined with a powerful GPU. It is unquestionably overkilling for pure gaming.

The 5950X features faster boost clocks than the 5900X’s slower base clock. Because greater clock speeds, rather than core counts, benefit games more, the 5900X will be a better bargain for pure gaming. However, if you want to mix productivity with gaming, the 5950X may be worth the extra money.